Most Popular Posts in Last 30 Days

The Golden Triangle Summer Exploration Season - it's started over a month to 6 weeks ago, for some companies, and is about to start for others.

The TSX-V is catching up to 600, Gold/Precious metals are bid with China tensions escalating (trade wars threat), Gold Juniors are finally getting some attention.... and the golden triangle has already delivered some spectacular results to begin off this reporting season.

Going to be a very interesting next several months as companies continue to deliver results. Maybe for once, the market will actually pay attention and value some of these companies fairly (or even speculatively - when's the last time we saw that in the gold juniors?!)

Some names that I have my attention on in the triangle this year:

"Diamond drilling was initiated in late May with two drills.  To date, the drills have completed 3,671 metres over nine drill holes in four pilot holes, and drill holes ten and eleven are in progress."

" 2019 drill exploration program .. continues to provide encouraging visual indicators of significant alteration and mineralization immediately south of the North Boundary mineralized zone. A total of 4000 meters (m) in 9 holes have been completed to date."

GGI "is pleased to announce that its 2019 drill program has commenced at its flagship E&L nickel-copper-rich massive sulphide discovery at Nickel Mountain in the heart of Northwest B.C.'s Eskay Camp. "

"Consultant geologist and nickel expert Dr. Peter Lightfoot spent 1 day of mapping and sampling with Etruscus at Hoodoo North and Hoodoo West, staked in March 2019. Assays are pending; and "

"Drilling permits have been received for this summer's drill program at the Rock & Roll project and Etruscus' first ever drill program will begin shortly."

Some initial sampling with assays pending - prior to ETR drilling start.

"CLM is pleased to report that a first-ever diamond drilling program has commenced at Burgundy Ridge on the western side of the Company's 550 sq. km Newmont Lake Project in Northwest B.C.'s Eskay Camp. "

Maiden drilling program in progress - no results yet. A lot of excitement has been built up here with a lot of social media and some stunning photos too, check this one out:

"Field investigations have confirmed the presence of gabbros at the "K9" target within the Thunder North area. Outcrops of gabbro were identified on the Kirkham Property along the southwestern extension of the >~12km trend known as the Nickel Mountain Gabbro Complex;"

The K9 target is at the upper NorthWest part of Metallis' claim bordering Garibaldi Resources. It would be quite the thing to see the company drill this Gabbro identified (and hit some nickel there) as it would prove out the previously talked about theories about multiple deposits along this 12km corridor.

Perhaps its too early to jump the gun though on drilling at Thunder North... as the NR also states, for the K9 target:

"Soil and selective rock-chip samples have been collected for geochemical and petrogenetic analysis. Depending on the results, Metallis geologists plan to carry out detailed studies aimed at establishing the source of the mafic igneous rocks and their potential to host magmatic nickel sulphide mineralization, and"

So more work required, before knowing what's there, and drilling, if it does happen.

Came with a very nice map (from my understanding, is a WorldView 3 image which identifies certain rocks types, via satellite) - see below. 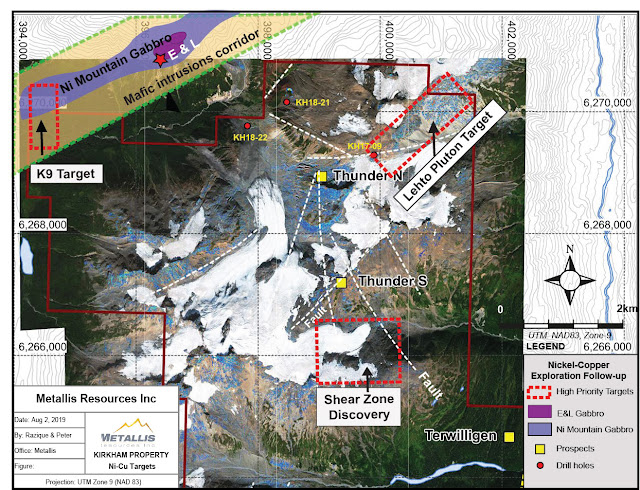