Most Popular Posts in Last 30 Days

Starting a mini-series on some compelling junior exploration plays for the upcoming summer season. I've found a number of excellent opportunities (in my view) which I'll detail in the article below. First, I'd like to start off with the fact that I am long these companies highlighted in these articles, and I'm not paid by anyone to write about them or compensated in any way for them.

I firmly believe we're in a bull market in the gold/silver market. The governments around the world have started the printing presses and they're turning hot hot hot. Gold majors and intermediate producers have done very well thus far and are hitting multi-year highs.

In previous bull markets, the juniors and exploration companies don't typically benefit until later stages of the runs. My thoughts are we're in maybe the second inning of a long bull market to come.

Starting off with Evergold Corp -  CEO is Kevin Keough, who previously ran GTGold (Saddle North and South in NW BC, Golden Triangle) and PCGold (Pickle Crow deposit in Ontario)

Lifted from Evergold's corporate presentation (https://www.evergoldcorp.ca/_resources/presentations/corporate-presentation.pdf) the photos are stunning views of Evergold's Snoball property in the Golden Triangle, in Northwest British Columbia, in Canada.

The company IPO'ed in 2019 after raising $3.4 million in October. They released 2 43-101's on their two flagships (Snoball and Golden Lion) but it seems there were some delays, so they weren't able to drill last year. The company however was able to put some drill pads on their Snoball target shown below and they're ready to drill in June of this year.

Golden Lion has additional work lined up in May/June this year and I believe the plan is to drill sometime in July to refine their drill targets.

In my opinion, both Snoball and Golden Lion appear to be exceptional exploration targets and a lot of upside potential. Snoball has never been drilled from Pyramid Peak or from the ridges pictured below. Golden Lion has had some historical holes in some of its prospects, but many of its targets are fresh/never drilled and new theories are in place (and to be tested) for the structure/trends of these occurances. 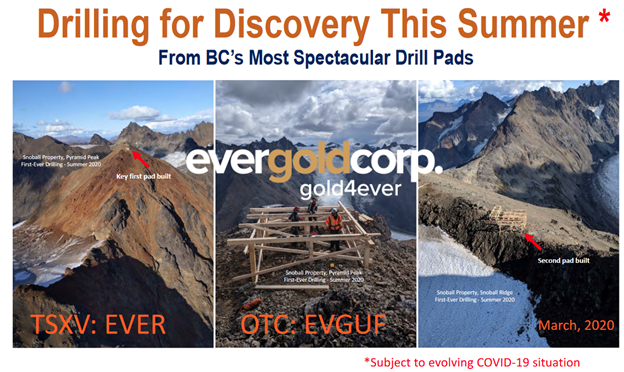 The company currently has $2 million in cash, and according to their corporate presentation they have a Phase 1 drilling program of approximately 2400m on both Snoball + Golden Lion, each.
There's a solid plan to increase meters drilled if they have early success (which means a raise of some sort) - "Note: Contingent upon success, the exploration program may expand.  Season can run as late as mid October" per the corporate presentation. Similarly to most golden triangle exploration companies, the season is relatively short, from June to October (~4-5 months), so it's good to see a plan is in place to maximize the upcoming drill program.

Fully diluted, the company only has 42.8 million shares outstanding, with all of its warrants and options being in-the money. My calculations have them at an average price of $0.22, and if they were all to be exercised would bring in another $3.35 million in cash.

As of 4/28/2020 - the enterprise value of the company (fully diluted shares x share price minus current cash minus cash if warrants/options exercised, currently in the money) is $15.6 million. 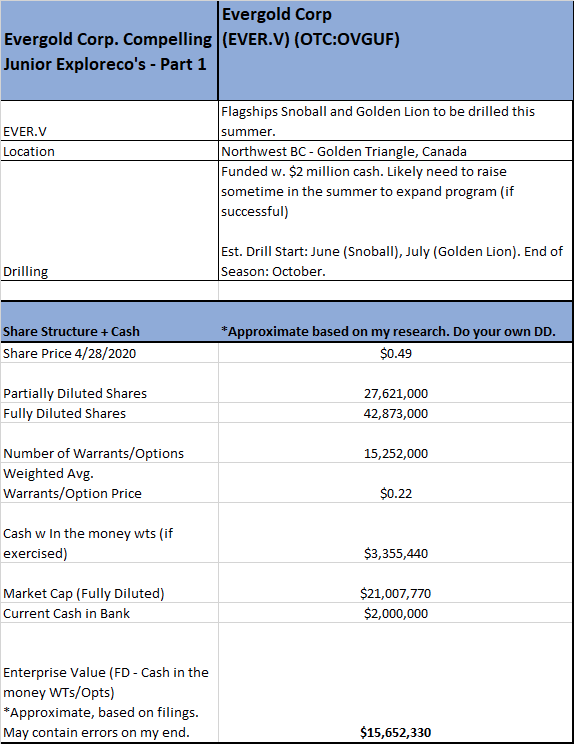 Rationale on why I own Evergold Corp:

The CEO, Kevin Keough has had previous successes with PCGold and GTGold.

Low share count, 27.6 million shares basic, 42.8 million fully diluted.
No cheap shares, IPO was done at $0.20
No 'unfair' cheap warrants or options
From conversations with the CEO, a good base of shareholders (several hundred)

For phase 1 drilling on both flagship properties (Snoball + Golden Lion)

Multi-year field work completed. Work was done in 2016-2019.
High grade gold samples in soil + rock samples
2x 43-101 Technical Reports are available for these properties
We get to reap the potential rewards of drilling (and their results) shortly without waiting multiple seasons for rock samples/surveys to be completed!

In my opinion, one of the highest risk:reward ratios you can get. There's a chance for two discoveries here across Snoball and Golden Lion.

8. Geology
All of the other stuff doesn't really matter if you don't have solid targets. Good thing here is I think the company has two exceptional properties, with an exceptional plan to execute this coming summer, with the data/geology to backup what could be some very interesting finds.

Probably one of the most stunning views from the top of this mountain, shortly to be drilled; "At Snoball, where key drill pads are already in place, field work will commence about mid June, also subject to snow conditions, to be followed shortly thereafter by drilling."

A. Drill pad is built on top of a large area of good grading material (similar to GT's Saddle discoveries)

KK: "At Snoball, the 'Pyramid Peak' pad has been special-built to allow for drilling 360 degrees - i.e. we don't have to move the drill other than to rotate it, and if the early holes look good and Pyramid Peak is carrying the goods in whole or in part, we could in theory systematically drill off a rather large volume of rock (and potential resource) from the one pad.  This would be very unusual but is a benefit of the location - holes at minus 55, minus 70, vertical, then rotate and repeat the process and so on." 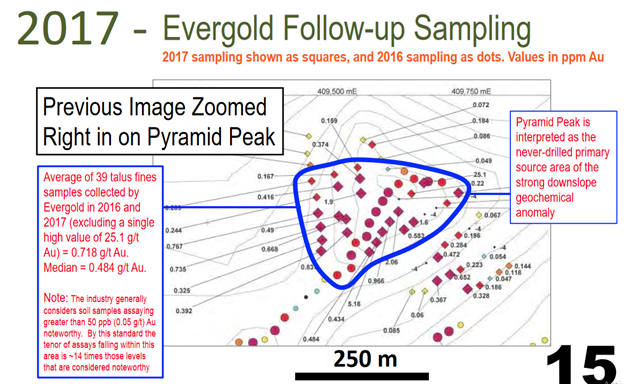 B. Compelling gold/silver rock samples (it's noted rock samples are in their nature selective and not necessarily representative of the mineralzation). However, I do take note of them, and it is certainly high grade. 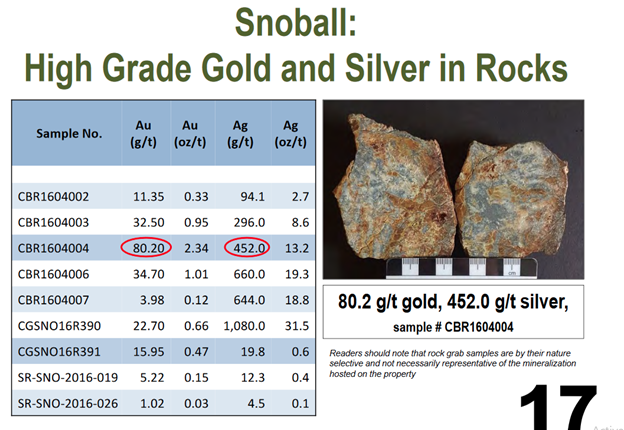 C.High Grade Vein potential - apart from Pyramid Peak (the ones on the front cover of their pres), there's also another pad 1KM away, which has some stunning gold samples. They'll drill here as well to see what they may find. 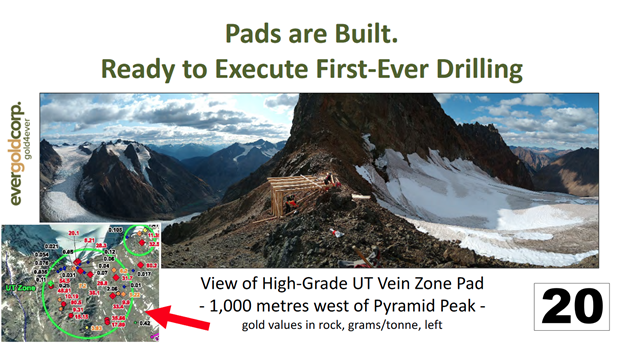 Golden Lion is not quite in the Golden Triangle, but more to the east. Nonetheless, the targets look very compelling. There is some additional work to be done, per their April 21 news release "Field work at Golden Lion is scheduled to commence in late May with baseline environmental work, to be followed about mid June, subject to snow conditions, by geophysical, geochemical and geological programs to refine drill targets. Drilling will then start in the latter half of July"

KK: " Golden Lion and the 'Toodoggone Trend' more generally, are in fact in precisely the same 'Stikine Terrane' rocks as the 'Golden Triangle' proper.  The Stikine Terrane arches north/northeast up from KSM and Brucejack over to the east, passing through GT Gold and Newcrest's Saddle and Red Chris deposits, then dipping down and running south/southeast as far south as Centerra's Kemess mine and Mt. Milligan and further south even.  It's just that to date that area been about as remote as it's possible to be in B.C., given that only a single gravel forestry road services it (it reaches to Benchmark's Lawyers property south of Golden Lion).

The Toodoggone has been known for two things: smaller very high grade gold-silver mines such as the historical Cheni, Baker, and Shasta etc., and giant tonnage lower grade "typical B.C.-style" copper porphyry mines of the Kemess and Mt. Milligan types.  Our (Golden Lion) part of it is virtually unexplored - and there's not a lot of that geological real estate left in the province"

A. GL1- Eye Popping Sample Grades - 13,406g/t silver found in 2019. Additional soil samples show a 800x100m gold anomaly which is undrilled, to extend what was previously drilled (east side)

KK: "Only the GL1 target - the historical zone - not GL1 North Ridge or any of the other - ever had any drilling - so only one of the numerous, presumably related, targets have been 'touched.'  We were attracted to the historical GL1 target and expanded our sampling beyond that zone, which is where all the other targets emerged from" 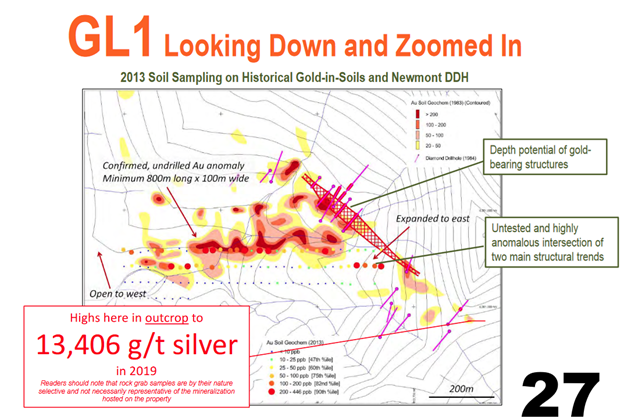 B. GL1- New Ridge Target - 'Exceptionally strong gold-in-soil sampling' results. The slide below tells the story by itself. The company has planned a 500meter hole in this area to start. 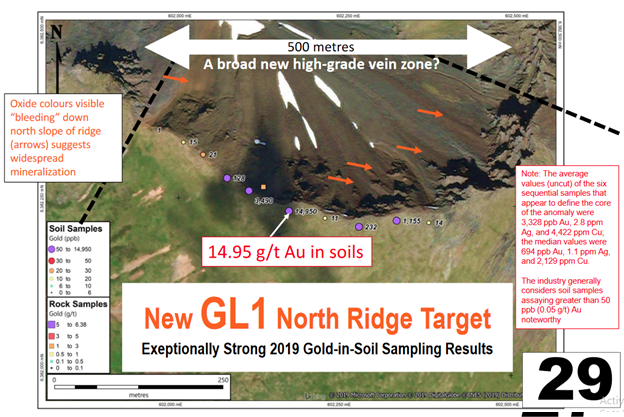 C. GL2 - More high grade, several styles of mineralization over 1KM^2. - all outcropping from the surface. Something is definitely there! 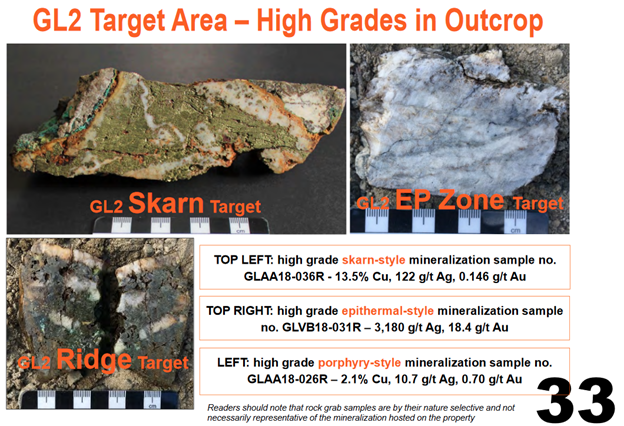 D. GL2 East Ridge Target - also outcrops, can be seen at surface. The presentation basically says, they'll hit it. Well - it's at surface, and they've sampled it, so why not?

KK: "GL2 Ridge East porphyry target shows promise of being a so-called "rich" gold-silver-copper porphyry of the Red Chris and KSM styles found on the northern and western parts of the Stikine Terrane.  The rocks are the same age as KSM, and we have the Hazelton-Stuhini contact right there at GL1, GL2, GL3... (BCGS reckons that many of the deposits in the Golden Triangle proper are localized proximal to it).  And, we've also clearly got very high grade gold and silver discovery / resource potential.  We just need to get the drills turning." 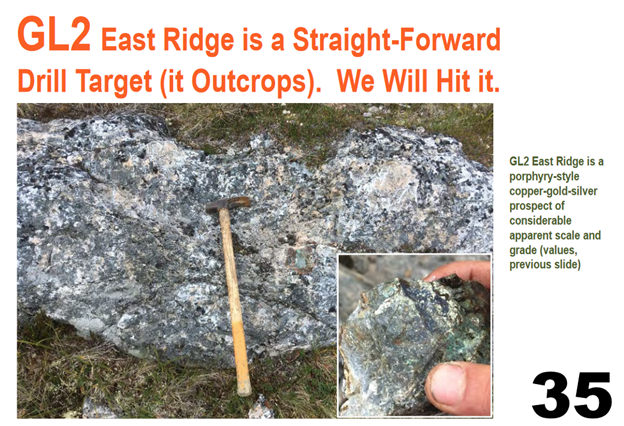 I encourage you to read the corporate presentation for yourself, it's laid out very well and tells the story very well, especially on the targets and property overview.

In short, Evergold is one of the most compelling stories I've found in this space in quite some time, and has all its ducks lined up. Most importantly, has 2, in my view, exceptional discovery delivering potential properties Snoball and Golden Lion.

Work has already started on Golden Lion to repair bridges for camp access, and things will likely heat up when drilling commences and speculation builds as it typically does in the Golden Triangle summer drilling season.

Snoball is ready to go as soon as snow clears from Pyramid Peak. And Golden Lion following shortly thereafter.

The stock has had quite a bump to around $0.50, and perhaps I would have looked better if I wrote this article back a few weeks ago when the stock was around $0.30; but even at these prices I think there's potentially a lot of upside, if the company makes a discovery. The current valuation seems reasonable for me.

As a reminder; junior exploration is very risky - I remind you to read the disclaimer once more.

Hope you enjoyed the article - please let me know if you have any feedback/comments. My contact information is above.

Disclaimer:
The author is not a registered investment advisor, currently has a long position in this stock. The author has not been paid by anyone to write this article. All facts are to be checked by the reader. For more information go to https://www.evergoldcorp.ca/ and read the company’s profile and  official documents on www.sedar.com, also for important risk disclosures. This article is provided for information  purposes only, and is not intended to be investment advice of any kind, and all readers are encouraged to do their own due diligence, and talk to their own licensed investment advisors prior to making any investment decisions.

*Edit 4/29/2020: Kevin has made some additional clarifications to some of the ideas presented in this article and are denoted with 'KK'